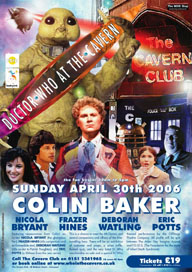 Actor PAUL DARROW, who played the charismatic AVON in the classic BBC sci-fi series Blake’s 7,  is the latest guest star to appear at the upcoming ‘DR WHO AT THE CAVERN event next April. A popular TV face, Paul has also recently appeared in ‘Little Britain’, plus ‘Hammer House of Horror’, and of course ‘Doctor Who’ where he played opposite fellow Cavern guest Colin Baker!

BUY A FULL PRICE TICKET BEFORE XMAS DAY, AND GET ANOTHER ONE FREE!! AN IDEAL XMAS PRESENT!!

Science-Fiction fans are in for a treat when former TV Time Lord COLIN BAKER headlines a special charity ‘Doctor Who Day’ at the world famous Cavern Club (‘birthplace of The Beatles’) in Liverpool next spring.

Presented by FANS LIKE US (the Wirral Dr Who local fan group) , ‘DOCTOR WHO AT THE CAVERN’ will also feature appearances from a host of celebrities including Colin’s ex co-star NICOLA BRYANT (the glamorous Peri), MARK STRICKSON (80s companion Turlough), FRAZER HINES (ex Emmerdale star, and 60s companion Jamie), DEBORAH WATLING (60s companion Victoria), and ERIC POTTS (who played one of the evil Slitheen creatures in the recent new series, and is a current star of Coronation Street).

With the BBC series winning millions of new fans (and several national television awards) following the recent success of the Christopher Eccleston and Billie Piper remake, here is a chance to meet a former incarnation, plus several companions and enemies of the time-travelling hero. With a new series currently being produced starring David Tennant, fans will be able to watch a brand new episode of Doctor Who on the Saturday night, and come and enjoy the event the following day!

There will also be an exhibition of costumes and props, a prize raffle, themed quiz, and the very latest Dr Who merchandise on sale from THE WHO SHOP – with a proposed exclusive launch of new products.

There will also be a special performance by the popular OFFSTAGE Theatre Group. It will be a brand new piece based on the Colin Baker, Nicola Bryant, and Frazer Hines story ‘The Two Doctors’, written especially for this event, with the world premiere taking place on The Cavern Club stage. Another premiere will be a screening of the comedy-drama film ‘WORKINGHEAD’ (written & directed by Brian Gorman). This surreal look at the world of cult TV fandom features appearances from Colin Baker, Steven Pinder (Brookside), Uri Geller, Paul Daniels, and many other famous faces.

All profits will be split between The Alder Hey ‘Imagine’ Appeal (the new charity recently set up with Yoko Ono’s approval), and F.S.I.D. (The Foundation for the Study of Infant Deaths: Cot death research & support).

Booking can also be made online at www.whointhecavern.co.uk

Information and images may also be obtained by joining http://groups.yahoo.com/group/drwhocavern and